After a long hiatus to become accustomed to real life and going to work, I`m back! I hope you like the new format and title of the blog. I tried to make it more user- friendly, but decided I need to take a class in blog appearance and marketing before it becomes totally professional looking. So you´ll have to wait for that. It´s hard to juggle your professional life, duties at home, as well as the hours you need to put in mastering social media in order to be a successful blogger. (Especially when your 11 year old students show you things about the internet and technology than you ever knew!) Hopefully now that I´ve updated the format, you will be able to just click on the category cloud in order to retroactively search blogs by category. (After I finish going in and tagging them into a category, that is…), but hopefully I can do that soon. 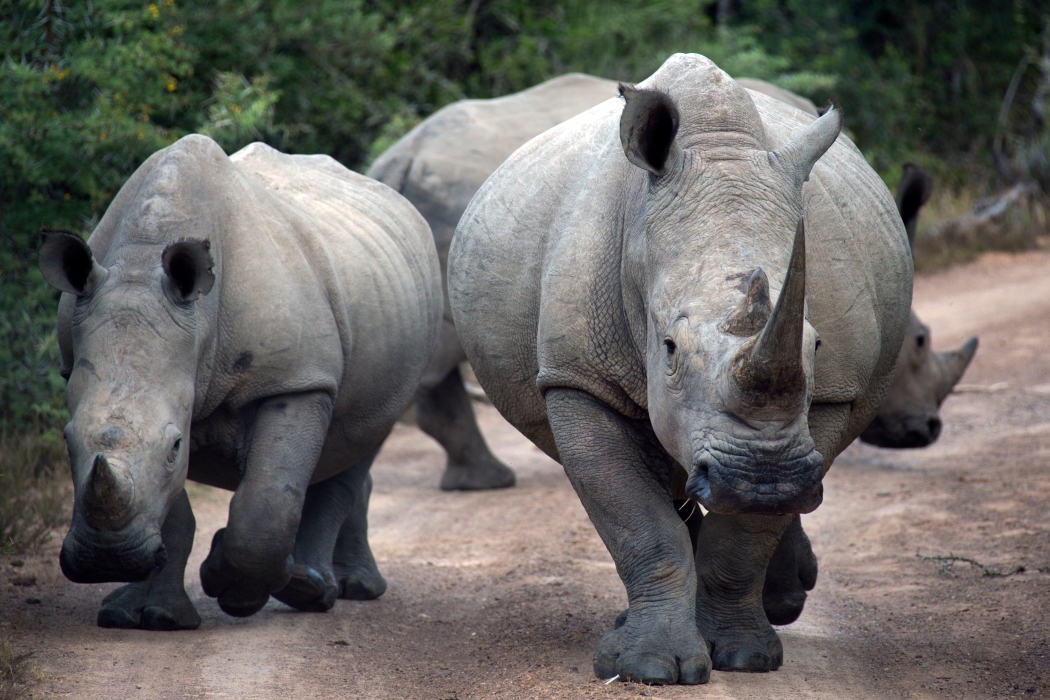 A white rhino family on our first day in Shamwari

And now let me finish the South Africa trip by telling you a little about our safari. First of all, when you say that you want to go on an African safari, as I did, realize that is a really broad statement.   There are so many safaris to choose from in the roughly twenty African countries that offer safaris. First you have to think about what season you are traveling in: for many reasons it is much better to travel in the dry season than the rainy one. You also have to think about what kind of animals you want to see. For example the terrain we were in is not really the home of hippos and crocodiles, although we did see some hippos. You should also consider what kind of terrain you want to see the animals in: savannah, brush, forest, etc. The last thing you need to think about is your budget. Safaris aren´t cheap, no matter how you slice it, but you can certainly do it within a budget if you want, if you don´t mind staying in tents or forgoing some of the luxuries lodges with gourmet food round the clock. Since this was a bucket list trip for me, Jon and I stayed at private game reserves and, seriously, the service and accommodations at both reserves were out of this world and highly recommended. We were also guaranteed to see fewer jeeps and people at our animal sightings because of their small size, which was nice. In conclusion, there are so many types and locations of safaris available, I recommend really spending some time researching so that you chose the safari that best meets your needs.

Jon and I made our choice based on the fact that we needed to travel in January, so we chose South Africa because most of the country would be in the summery dry season. We would be able to visit Shamwari Game Reserve, just outside of Port Elizabeth, in the south of the country. This is a private game reserve, so it has fences to keep its animals inside the property. The land that Shamwari occupies had become farmland for many generations. They took the agricultural land and let the natural fauna regrow. Over a period of twenty-five years they reintroduced animal species and returned the area to its natural state.

After Shamwari, we planned to travel to the northeastern part of the country, to a game reserve just outside of Kruger National Park, where it was supposedly the wet season. We heard Kruger had great animal sightings no matter the season, so we decided to go to Sabi Sabi, another private game reserve with no fences between it and the national park. Here we had a different experience as our lodge was right in the heart of leopard country, whereas Shamwari has a few fences and things to keep the dangerous animals away from the lodging. You do not need guides to accompany you home at Shamwari, whereas at Sabi Sabi you do, because you might encounter a leopard or lion sitting outside your hut or near your back balcony, if you go alone.   Luckily, this did not happen to us and we felt quite safe all the time, except maybe on our first afternoon game drive at Shamwari, where I made a rookie mistake.

We arrived at Shamwari game reserve around two, and it was right off the highway. I couldn´t imagine that there could be lions and giraffes and crazy looking African antelope in the vast fields and hills surrounding us. The scenery didn´t really jump out to me as safari fauna. However, when we entered the park through the large electric gate that looked straight out of Jurassic Park, I realized it was for real: I was really about to embark on an African safari and lay eyes on the types of animals that I´d only seen in zoos and movies. Even now, a month after returning to Chile, I still get teary eyed thinking of it. Six months ago, I was wondering if I was going to make it till Christmas, and here I was, watching elephants graze across the river from the restaurant at our Game Lodge. It was such a magical experience!

Since we arrived midday we missed lunch so the staff showed us immediately to our “tent”. The lodge we stayed at was called Bayethe Tented Lodge, but they really shouldn´t call it a tent, because it was nothing like any tent I had ever seen before. Yes, our room had canvas siding that the staff zipped up at night during turn down service, but the building was on stilts, with a wooden floor, sitting area, giant bathroom, two showers, and our own front porch with private plunge pool.   Once we realized we learned that lions were not going to pop out of the bushes and attack us and that we were only going to be visited by small animals like warthogs and impalas, we were able to completely enjoy our surroundings in the wilderness and relax in the pool. It was hot!!

Our ranger at Shamwari was a local Afrikaner man named Jacques. At first I found him a bit gruff and sarcastic for my taste, but I soon grew accustomed to his mannerisms. You have to trust your rangers in the game parks because they are the ones driving you and four others into some pretty precarious situations. They decide how close you get to the animals and where to park to watch them, sometimes running over tree branches, going down riverbanks, and through giant mud puddles to do so. The roads in Shamwari were pretty bumpy because it was so rocky and hilly, and if you were in the elevated seat in the back you really slammed down hard on your butt.  When we got up to the top of the mountain to get a view of the terrain, I realized that Shamwari´s property was a lot larger than I previously thought.

Our first big sighting happened at the end of our first game drive.  The Austrian woman behind us in the jeep spotted a white speck on the horizon, and through the binoculars, I saw that it was a rhinoceros.  So we sped on over and watched the animals for awhile. It turned out to be a mom with its baby.  The rhinos were also joined by another juvenile, so suddenly, there we were with three giant animals munching on grass and leaves right next to us. It was amazing!

Afterwards, we drove over to a small lake nearby to our first sundowner, a tradition left over from the lecherous British colonists.  Sorry ol’ chaps, but the small amounts of quinine in a gin and tonic will not protect you from malaria.  We parked in front of the water and Jacques got out to make sure there were no dangerous animals in the bushes. When he declared them to be safe, I went behind a bush to pee. I had not yet learned to abstain from beverages until AFTER the game drive. As I pulled my pants down I heard Jon calling me from the safari jeep. I couldn’t quite make out what he was saying so I peeked around the bush. He was gesticulating wildly for me to get back in the safari vehicle. Jacques was hurriedly packing up the drinks and as I successfully stepped up into the vehicle I saw it. We had inadvertently parked right next to a hippopotamus that had previously been submerged in the lake.   It was now staring right at us and did not look happy.

Now, you probably have heard this, but hippos are the most dangerous land animal in Africa. They kill 10 times more humans than lions a year. They are fast and extremely heavy. Their jaws are so powerful they can snap a crocodile in half. Needless to say Jacques believed that we were in danger of being charged and so we backed up and sped over to the other side of the lake clearing in order to have the drinks. A British lady in the vehicle was not feeling so well and asked if we could go home instead of partaking of the gin and tonics. We agreed, so we didn’t get out of the vehicle. Instead we headed back. When we were about five minutes away, another ranger said he spotted a lioness at the same spot we had just been. We rushed back, and there she was: regal and absolutely terrifying. We watched her till sundown but I really just wanted to get out of there unharmed. It’s not often that you have an extreme brush with danger twice in one day! But this was only the beginning of our safari experience…