Now, I´m sure some of you might be asking: Why would two young, world travelers choose to go on a truly American Mid-West holiday, exploring the lighthouses, parks, shores, and bed and breakfasts of Lake Michigan? In fact, most would say that our honeymoon might be more befitting of older, possibly retired couples, of which we encountered several on our travels. Well- the answer is really two-fold. 1) I had seen on Good Morning America that Sleeping Bear Dunes and the sandy beaches of Lake Michigan were recently voted the Most Beautiful Place in America so I decided I needed to see them for myself, and 2) before I began traveling the world, my family visited much of our own country during long, summer road trips. I have been lucky enough to visit almost all of the states, except for six. Michigan was one of them. (Of course, after I went on the trip, I realized that I hadn´t counted Alaska in that number, so I still have six more states to go: Montana, Idaho, Wyoming, Ohio, Alaska, and North Dakota.) So with those goals in mind I started to map out an itinerary for a ten day road trip around the lake, spending the night in each of the following ports of call: Milwaukee, Door County, Mackinac Island, Leelanau Peninsula, and Grand Haven.

My sister accompanied us on our first stop of the romantic honeymoon trip around the lake. We both wanted to spend a few quality sissy days and also to celebrate her birthday together, so we chose Milwaukee because it was on the lake, neither of us had been there, and they also had cheap flights to her hometown of Portland. I didn´t know much about Milwaukee before visiting except that they are known for their cold winters, beer, and cheese; and after our two day visit, I have concluded that Milwaukee is a very lovely lakeside city, (at least in the summer) with, indeed, a lot of beer and cheese. The abundance of these two ingredients makes Milwaukee a perfect foodie destination. There are lots of breweries to visit, and many fun restaurants to explore. Upon arrival at our hotel, we noticed that it seemed more like a ghost town than the 28th largest city in the United States. Despite it being a warm summer´s day there were no pedestrians out and about, and hardly anyone exploring the city, even by car. We took a stroll from our hotel to the Milwaukee River, home of the misnamed Lake Front Brewery (it is NOT on the lake front, in case you are wondering…). Along the way we passed only two people. However, when we entered the beer hall, we realized that all the tourists in Milwaukee were inside drinking beer. Which is what we proceeded to do for the rest of the afternoon. Jon´s brother, Adam, had recommended Lake Front because it is a less touristy tour than say Miller´s or PBR, and they also include a mug and four pours of beer within the 7 dollar entrance fee. A pretty good deal, if you ask me. After discovering that Lake Front´s Wisconsinite summer beer was the one for me, I had three pours of it and then we proceeded/stumbled back down the river with water jugs in hand to explore Historic Old World 3rd Street. Again, we didn´t pass very many people and, befuddled, we popped into the Wisconsin Cheese Mart where we proceeded to partake of more Wisconsin beer and cheese. Delicious! That evening we ate yet again, this time dining on barbeque with Jon´s high school friend Brad and his girlfriend Cortnee at the Smoke Shack. This was followed by drinks at their stunning apartment overlooking the Summer Fest grounds along the lake. It was there that we learned that nobody was out in the streets because we arrived a day after Summer Fest ended, and everyone in Milwaukee was resting from the party. Probably bad timing on our part, but oh well!

On our second day in MKE we decided that we obviously needed to eat some more, so I booked us a food walking tour of Brady Street, an old ethnic and hippie neighborhood in the northeastern part of the city. First, though, we thought we might not get enough food on the trip so we tucked into some scrumptious eggs benedicts at the Café at the Plaza, a cute little spot in the courtyard of our hotel, and then the three of us took a cab to Brady and discovered that the other two members of our food tour were indeed an old, retired couple. With grandma and grandpa in tow we forayed down the street sampling homemade pizza, authentic Mexican tacos, cannolis, olives and cured meets from a historic Italian market (Gloriosios´), corned beef sliders, and more beer. I really enjoy food tours because the guides give you a lot of the cultural history of the area, you get to focus on some interesting neighborhoods, and of course- you sample foods that are typical of the area. All of our needs were met on the Brady Street tour and it left us well positioned to stop into a local dive bar to watch Germany humiliate Brazil in one of the most embarrassing soccer matches I´ve ever watched. After we rolled ourselves home wondering whether we could possibly fit more food in our bellies, we refreshed at the hotel in time to celebrate Ali´s birthday at the beautiful and decadent Lake Park Bistro. Although our taxi driver, for the second time, had never heard of the area we were going to (??!!) we managed to direct him to Lake Park and strolled past some gorgeous homes, a stately lighthouse, several lions statues and a golf course before we found the restaurant. Lake Park Bistro is an upscale French restaurant whose chef is apparently quite famous according to the myriads of newspaper clippings in the foyer of the restaurant. And we weren´t disappointed in our meal: our only complaint was that we know nothing of French wine and therefore were unable to tackle the expensive wine menu. They kept bringing us samples and it all tasted terrible, and much too expensive. The appetizer of breaded, soft-boiled egg, on top of a salad with mushrooms and truffle oil was, however, exquisite. As were our steaks and lamb chops, cooked Medium Rare to perfection. My only complaint about the restaurant was that I was still so full from all the food that I had been eating for the past week to fully enjoy the restaurant. What I´m saying is, when you visit the Lake Park Bistro, bone up on your French wines first (or just drink beer) and come HUNGRY. It was a great end to sissy´s visit and a wonderful way to end our time in the city.

Door County is a popular vacation destination in Wisconsin, which is said to be the Martha´s Vineyard of the Midwest. We had heard a lot about the cute little towns and the beauty of the lake, so we knew that Door County needed to be a stop on our trip. However, unfortunately we only spent one night there so I´m not sure I can be a good judge of the area. It was just alright for me… The day we arrived at our hotel in Egg Harbor (Ashbrooke Manor) it was a bit overcast, so we headed to Peninsula State Park in the hopes of doing a hike before the rain set in. I had read a little about each of the places we were visiting, but I really had no expectations and nothing I really HAD to do, so it was nice just being able to decide what to do as we went. The State Park was beautiful- a very woodsy area along Green Bay with miles and miles of hiking and biking paths. It looked like a very nice place for a family to camp for a few days in the summer. Well, due to time constraints, we were only there for the three hour tour, so we headed to the scenic drive and stopped at a few of the outlooks before deciding to do the most popular hike in the park, Eagle Bluff Trail. I really enjoy relatively flat hikes that are shaded and follow a water source, so this hike met all three of my requirements. Unfortunately, due to the wet winter, the mosquitos were in full bloom, so Jon spent most of the time swatting his neck and hurrying so as not to get bitten. I, on the other hand, am so full of drugs that I must not taste good to mosquitos anymore, and so I escaped without a single bite. At the end of the two-hour hike Jon hurried to escape the bugs in the car and I decided to climb the Eagle´s Tower in order to get a view of the area from up high, above the tree line. When I reached the top of the wooden staircase a young toddler was in full meltdown mode pounding the floor and screaming at his dad that he didn´t want to climb back down- he wanted to jump!! so I snapped a picture and hurried down before I became witness to the small child flinging himself off of a wooden tower in Upper Wisconsin. Luckily, I noticed the father and son duo made it down off the tower shortly after I did, so I breathed a sigh of relief.

After our time in the State Park we drove through the quaint town of Fish Creek (pronounced by the locals as Fish Crick) and spent the rest of the afternoon enjoying the jacuzzi and indoor pool at our “Adults-Only” hotel while we watched a group of 70 year olds sipping wine on the patio for happy hour. My suspicions about our old people vacation were coming true!   We ate a mediocre dinner at the best restaurant in our town, according to Travel Advisor, and decided that we´d had about as much of Door County as we really wanted for the time being, and so we left early the next day without visiting any of the wineries, eating cherries, riding the Door County trolley, or doing any shopping in the cute towns, which seemed like the major attractions of the peninsula. We plugged our next destination, Mackinac Island, into the GPS and began our six hour journey, back down to Green Bay, across the Upper Peninsula and through to the northeastern section of Lake Michigan where it meets Lake Huron. 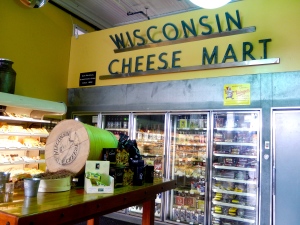